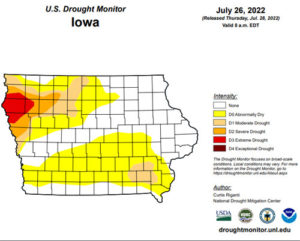 Three state agencies are developing guidelines and real-time resources for city and county officials who may have to restrict water usage during a drought emergency.

“We’re trying to set up a framework that will help local communities, local water utilities, emergency management folks be prepared to deal with a drought when it comes by answering those questions: ‘What should be do and when should be do it?’ and we can provide the data and the information that helps them make those decisions,” Hall said.

The latest information from the U.S. Drought Mitigation Center shows there are “extreme” drought conditions in four northwest Iowa counties, but water shortages haven’t dropped to the level of what’s called an “exceptional” drought.

“We have seen droughts on a fairly regular schedule. We saw, of course, a significant drought in 2012,” Hall said. “We saw some very dry years in 2020 and 2021. This year is looking pretty dry as well.”

In July, state officials hosted meetings in Sioux City, Cedar Rapids and Creston to hear from water utilities, local communities, county emergency managers and industries that use water. A final virtual meeting will be held this morning with about 70 representatives of those groups.

“We’re almost to the end of the stakeholder piece,” Hall said. “We have a science and data team that’s looking at information that’s available and how we might establish some trigger mechanisms for the state, so we are right in the middle of developing of the heavy duty stuff of the plan right now.”

Hall is the hydrology resources coordinator for the Iowa Department of Natural Resources. On Thursday, Hall will be issuing a statewide summary of water resources. He said water levels in some areas of northwest Iowa are alarmingly low.

“As the temperatures start to climb and we don’t see any precipitation, it could get a little bit rough in some places,” he said.

The situation, though, isn’t currently as dire as the last major drought of 2012, according to Hall. “But on a local basis, there are some areas of northwest Iowa that are struggling to see what their water situation is going to be in three weeks, four weeks, six weeks if we don’t get much rain,” Hall said.

According to the state climatologist, “unseasonably dry conditions persisted across Iowa last week and the drought intensified in the state’s northwest corner.”

The state climatologist and the Department of Homeland Security are working with the Iowa Department of Natural Resources on the state plan to respond to water shortages due to drought.