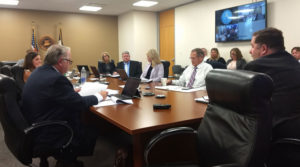 Alan Ostergren (far left) makes his case to the Board of Education. (RI photo)

The state Board of Education decided today against reviewing a decision by the West Des Moines School District to keep the book “Gender Queer” in its freshman building library.

The Board of Education decision sided with their legal counsel’s recommendation that the parent can’t bring the request because her son was not in the school at the time she asked for the review. That vote came after they heard from both sides on the issue.

Alan Ostergren is the lawyer for the parent and disagreed, and says there’s no objective criteria at any level in reviewing a book. “We’re talking graphic depictions of sex acts. And I want to be clear, it’s not because it’s two boys in here. Okay, that’s not the point. That’s not the point of this. I don’t care if it’s males and females, I don’t care if it’s adults, whatever it is,” Ostergren says. He says the parent wants the book removed because the actions depicted in the pictures and writing are not appropriate for this school.

“The issue is, we all understand the context that this is happening in. Parents feel that the public schools are absolutely out of control, and disregarding their interests and what they want to see,” he says. The school board vote on the issue was split and Ostergren was asked if the recourse for the parents is at the ballot box. Ostergren says this is a choice as he says nobody in authority decided to do anything in this case.

“Standing up and saying, ‘You know what, maybe we’re going a little too far.’ Maybe we’re sexualizing children too much. Maybe we should listen to people. And not just assume that because we’re credentialed, we know everything,” he says. Ostergren says there was significant debate during the school board meeting and he says significant opposition to the board’s decision.

“I think it reflects the debate that’s going on all over Iowa, that parents are beside themselves at this feeling of loss of control of what’s going on in public schools,” he says.

The attorney for the West Des Moines School District, Kristi Latta, disagreed with Ostergren’s assessment of the case.
“The fact that Mr. Ostergren says there’s no objective criteria is just not the case. In the record, before the administrative law judge policies were submitted that talk about materials, controversial materials, objection on materials, you know, what factors are to be weighed in those situations,” Latta says.

She says the Board of Education review is the sixth time the issue has been reviewed and things followed the protocols set down, starting with a building level review committee. “The committee ultimately decided to keep the book on the shelves of the library — again, just to be clear — not required reading, not part of the curriculum. It’s just sitting on the shelf in a library. So optional, voluntary, all of that stuff,” Latta says. “And as the superintendent testified at the hearing, to the extent that any parent didn’t want their child the ability to check that book out, they could make a note of that, and that would be accommodated.”

Latta agreed with the Board of Education’s legal counsel on whether the board should even consider the merits of the book.
“I think there is a jurisdiction issue with regard to the fact that this is not a parent of an aggrieved child. The child does not attend the school where the child is at. For that reason — they really cannot be aggrieved,” she says.

Latta says the ultimate choice should be left to the people who are elected by the community in which they live, and they’re responsible to their constituents. She says if there’s dissatisfaction then the remedy is at the ballot box. “I think if there’s dissatisfaction or someone’s unhappy to a certain degree, they can, you know, make another choice then about, you know, whether or not that’s a school that they want to attend. They can take steps to say, I don’t want my child to check that particular book out of the library,” according to Latta.

She told the Board that overturning the school board decision would create more issues. “If you were to reverse the decision, based on the merits, it would be a sea change for the way that this prior state board has acted with regard to its precedent,” Latta says.

Ostergren says his client is considering the options and whether they will challenge the Board of Education’s decision in district court.