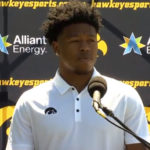 Fall camp is underway at Iowa where the Hawkeyes enter the season as the defending Big Ten west division champions. Safety Kaevon Merriweather is part of a defense that intercepted 25 passes a year ago as the Hawkeyes reached as high as number two in the national polls.

“To actually win the west is something I always wanted to achieve while I was here”, said Merriweather. “Now it is not enough to just get there, I want to win it all.”

Senior Sam LaPorta enters this season with more than 11 hundred yards in receiving and is the latest in a long line of outstanding tight end for the Hawkeyes.

“I definitely learned about that when I came to Iowa and just the rich history it has had with tight ends”, said LaPorta. “It is cool to be part of that.”