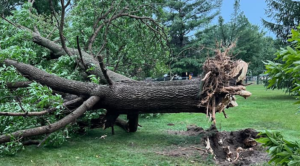 Many Manchester residents are dealing with storm damage after nearly two inches of rain caused flash flooding and wind gusts of up to 58 miles an hour hit the city at 11 a.m. Wednesday. Delaware County Emergency Management Coordinator Mandy Bieber says the north end of Manchester seemed to be hit hardest.

“We sustained tree damage, had some power outages,” she says. “We had one report of a livestock building being flipped over and then two houses damaged by falling trees.”

“The wind somehow managed to turn that on us,. If you take a look at it, it does not look like the pole is bent or anything, it just needs to be repositioned. That’ll take some work,” he says. “We’re not quite sure how we’re going to do it just yet. We’re analyzing the best way to get that twisted back into place.”

Officials say intense rain fell elsewhere in Delaware County on Wednesday, but Manchester appears to be the only area where the storm caused property damage.