You are here: Home / News / Heat advisory returns for much of state 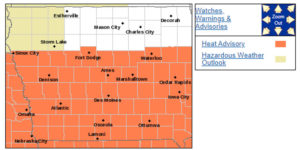 Another steamy, summer weekend is ahead with yet another Heat Advisory posted for a wide portion of the state.

Meteorologist Rod Donavon, at the National Weather Service, says you may be getting sick of the hot, humid days but it’s relatively in line with August in Iowa. “We do have warming temperatures coming back to the forecast, already starting today as we have highs back in the 90s,” Donavon says. “Hot and humid conditions are expected on Saturday and we are looking at heat index values in that 105, even 108 range by the afternoon, so extremely warm and humid by the afternoon.”

The Heat Advisory covers the lower two-thirds of the state, roughly all counties south of Highway 20, from noon Saturday through 9 o’clock that night. The forecast calls for the dry spell to end for parts of the state on Saturday night — with possible thunderstorms.

“They have some rain chances coming in, especially later Saturday evening and as we go into Sunday, the cold front finally reaches the area,” Donavon says. “We have some areas possibly could get some decent rainfalls and then we are followed by much cooler conditions, especially as we go into Monday with highs only in the 70s.”

Temperatures Sunday are still expected mostly in the 80s and 90s, with a cool-down early next week, and highs back in the 90s by Wednesday.