You are here: Home / News / Bridge in Williamsburg named for fallen Vietnam soldier 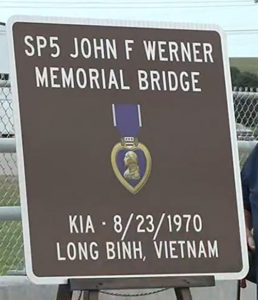 This sign will hang on the John Werner bridge in Williamsburg. (KCRG TV photo)

The City of Williamsburg renamed the State Street Bridge in a ceremony Sunday to honor John Werner — the only native of the community to die while serving in the Vietnam War.

Werner graduated from Williamsburg High School in 1968 and served in Vietnam with the Army’s 1st Air Cavalry Division as an Aircraft Engine Repairman. He died on August 23rd after being wounded the previous day in an artillery rocket mortar attack, he was 20 years old.

Dwane Gragg of Williamsburg American Legion Post told KCRG TV the naming of the bridge honors Werner and all who serve. “The whole reason we started this process was just to raise awareness for our young men and women that go off to any branch of the service and also their families, the families that cry when they leave,” Gragg says.

He says service takes a toll on families as well as veterans.  “And whether they come back or not, it’s always the distances and separation on families are tough,” he says. Members of the American Legion as well as Werner’s niece and the mayor of Williamsburg spoke at the ceremony. The Williamsburg city council approved a resolution to rename the bridge on March 14th of this year.