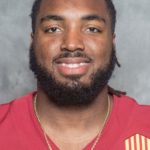 Iowa State linebacker O’Rien Vance felt he still had something to offer the Cyclones. The former Cedar Rapids Washington standout decided to return for a sixth season shortly after a the 2021 campaign ended. He suffered a hamstring injury in last year’s opener and was hampered by injuries all season.

“The way the season went for me I knew later in life I would not want to look back and know I could have taken another year and potentially done something”, said Vance. “I was also looking at how many potential leaders we had leaving.”

Vance gives a veteran presence to a defense that lost several key players.

“You talk about a guy that steps into that locker room and when he speaks everybody listens it is that guy”, said Cyclone coach Matt Campbell. “O’Rien Vance is the epitome of great leaders we have had in this program.”

The Cyclones open at home against Southeast Missouri on September third.