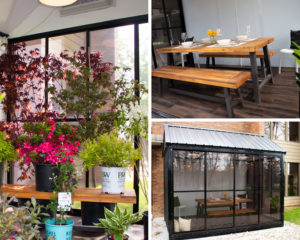 An eastern Iowa company is manufacturing and marketing what it calls “micro rooms” that can placed in your back yard or beside the house to be used as a spare bedroom, office or sunroom, and in a host of business applications.

Fred Smith, co-owner of FastPaks — based in Davenport, says they have four styles of rooms, all of which are eight-by-12-feet with a 10-and-a-half foot high cathedral ceiling.

The price of a micro room starts around $16,000, which Smith says is a much more cost-effective solution to solving space needs versus hiring a contractor to build a permanent addition to your home or business. “There’s no building permit required. These are temporary structures. They don’t need a foundation. They’re not taxable and they’re modular,” Smith says. “You can hook them together if you need extra space, plus, if down the road you move, you just fold it down, put it on the flatbed and take it with you.”

While Smith emphasizes the micro rooms are temporary, they’re exceptionally sturdy and are built to last. “They’re made of steel with vinyl or insulated hard side panels,” Smith says. “We ran a structural analysis on it with a local engineering firm and they have it rated for 110 mile-an-hour winds and eight-to-10 feet of snow, so these things aren’t going anywhere.”

FastPaks’ micro rooms are being featured this week at the Home & Garden Show in Austin, Texas, with a series of similar home shows coming up, including the one in Des Moines in February.