You are here: Home / News / Ernst and other Iowa Republicans question FBI search of Trump’s home 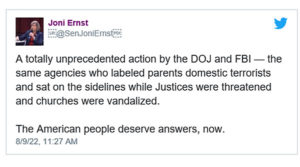 Governor Kim Reynolds and the five Republicans in Iowa’s congressional delegation are calling on federal officials to release details about the FBI’s search of former President Donald Trump’s Florida home.

“Obviously no one knew that this was going to happen or occur, like to know what’s behind it,” she said. “We need clear answers coming from the (Attorney General) Merrick Garland on why this was executed the way it was executed (and) what they were looking for.”

According to Ernst, Republicans are skeptical, in part, because the Department of Justice and FBI have been “sitting on the sidelines” when they should have investigated threats to Supreme Court Justices.

The great fear and the concern that I’m hearing from the American people and something that I share is that we are now seeing the weaponization of the Department of Justice and the FBI,” Ernst said.

Governor Kim Reynolds tweeted that “the Biden Administration is taking our nation down a dangerous path.” Congresswoman Mariannette Miller-Meeks of Ottumwa, the only Republican in Iowa’s House delegation who Trump has not endorsed, said in a tweet last night that it’s time for Washington to focus on the crimes happening at the border and in U.S. cities and “not waste taxpayer dollars investigating political rivals.”

Ernst said it appears the search may be related boxes of presidential records and classified material Trump took to Florida that should have been turned over to the National Archives.

“If it’s something that simple, then tell us,” Ernst said. “Tell us these are things that should go to the Archive, but we haven’t heard a direct answer on that yet.”

Senator Chuck Grassley said in a tweet this morning that  “we’ve got a right to be skeptical” about the search of a former president’s home. Grassley said without transparency, the FBI and Department of Justice “risk further damaging their credibility.” Republican Congressman Randy Feenstra of Hull said in a tweet that the FBI ‘must immediately provide a full accounting of facts.”

Republican Congresswoman Ashley Hinson of Marion said via tweet that if voters elect a GOP majority in the House this November, Republicans will “provide rigorous oversight of the Biden Administration and ensure they are serving the American people, not targeting them.”

Democrats like House Speaker Nancy Pelosi say no one is above the law, even presidents, and the investigation should be allowed to run its course.