You are here: Home / News / Dyersville hosting many activities around Field of Dreams baseball game 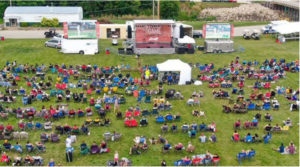 Beyond the Game photo from last year’s event.

The northeast Iowa town of Dyersville is hosting many thousands of visitors this week for the Major League Baseball game at the Field of Dreams site.

Following last night’s first-ever minor league game at the field, tomorrow night, it’ll be the Chicago Cubs and the Cincinnati Reds with a national TV audience. Dyersville Chamber director Karla Thompson says the weeklong Beyond the Game festival is well underway, and one of today’s highlights is for autograph seekers.

“We have a tremendous amount of former MLB players that are going to be signing for free, so that is the best part,” Thompson says. “Definitely go to BeyondTheGameIowa.com to find out when the celebrities are signing as you’ll want to line up for that.” There’s live music, a parade of Clydesdale horses and a string of other activities, including the showing of a familiar film at 7 o’clock tonight.

“We have to show the movie ‘Field of Dreams,’ I mean you just can’t be Dyersville and not watch the movie
‘Field of Dreams,’ and we partnered with Tysons who’s going to be giving away free popcorn,” Thompson says, “so come on down to City Square and watch that.”

Tickets for the Cubs versus Reds game at the Field of Dreams are commanding a high price, so Thompson suggests the next best thing.  “We’re gonna have music, kids’ games, the vendor area is open. If you don’t get major league baseball tickets, you can sure watch it in our square for the official viewing party,” Thompson says. “We’re gonna have a couple of LED screens up and you can watch it with everyone else. That just builds the whole excitement throughout town.”

The free Beyond the Game Festival continues through Friday. She says the community learned a lot from last year’s inaugural event – including Dyersville’s businesses, which have created their own merchandise, everything from t-shirts to specially brewed and labeled beer.