You are here: Home / News / Ernst says U.S. must be more aggressive in order to expel Russians from Ukraine 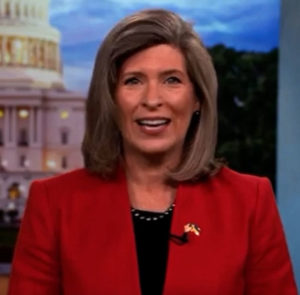 “To make sure the Ukrainians are a safe distance when they are shelling the Russians,” Ernst said, “because right now it’s turning into trench warfare and we know that does not progress very quickly.”

“We want to expel or see the expulsion of Russians out of Ukraine and we want to minimize the destruction of Ukrainian communities,” Ernst said. “That’s why I think the Biden Administration needs to step up with more weapons and munitions.”

President Biden released a billion dollars worth of military hardware to Ukraine this week. Ernst said without longer-range missiles, the war will drag on for years and much of Ukraine will be destroyed.

“The Russians are just basically carpet-bombing areas with artillery, which means there’s a lot of loss of innocent life and the Russians — they honest to goodness don’t care. We do care,” Ernst said.

Ukraine officials have been pushing for a shipment of U.S. missiles that can hit targets up to 190 miles away. President Biden has said the U.S. does not intend to provide Ukraine with weapons that could reach into Russian territory. Ernst said that’s “risk averse” and it’s time to take “a more aggressive stance” against Russia.

“We just need to ensure that the Ukrainians have their their hands on those types of munitions and are just bombing the heck out of the Russians that are in Ukraine,” she said.

Russian forces occupy about 20% of Ukraine
territory today, according to Ernst, and she said they’ll continue inching forward without a change in tactics. Ernst, a Republican who was in the Iowa National Guard, does not support sending U.S. troops into Ukraine, but has voted to provide the money so the U.S. remains the main supplier of weapons for Ukraine’s military.