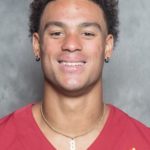 Iowa State receiver Xavier Hutchinson calls an injury he suffered a blessing in disguise. Hutchinson set an ISU record with 83 catches a year ago in being named All Big-12. He explored entering the NFL Draft but a thumb injury made the decision to return an easy one.

Hutchinson says Iowa State has been the perfect fit for him.

“Just the family atmosphere and having a change to etch my name into Iowa State football history”, said Hutchinson. “I looked up Hakeem (Butler) and Allen (Lazard) before I even got here and that’s kind of who I looked up to and that is who I try to be for Iowa State.”

“I think one of the benefits we have reaped as a team is when some of your best and most productive players have that kind of ability it spreads like wildfire through your program”, said Campbell. “He certainly has laid great groundwork for our program because of the way he has gone about his business.”