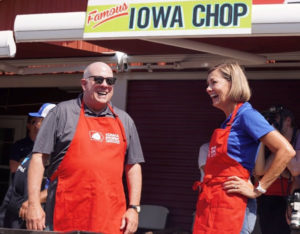 Maryland Governor Larry Hogan says he’s not sure he plans to run for president, but he has just joined the ranks of hundreds of White House hopefuls who’ve visited the Iowa State Fair.

Hogan, a Republican, is a two-term governor who cannot seek reelection due to term limits in Maryland. Hogan told Radio Iowa he wants to continue to be a voice in the GOP when his term ends in January.

“I’m in the bluest state in America as a Republican governor. I’m only the second one in 242 years to ever be re-elected,” Hogan said. “I think I have something to say about how we grow a bigger tent and how we are more successful about winning elections instead of losing elections.”

The Republican candidate Hogan backed to succeed him as governor lost in July to a candidate endorsed by former President Trump. Hogan won’t be voting for Trump’s preferred candidate in November.

“(Trump) picked the guy that was at the Capitol on January 6th, who took three loads of people, who was talking about hanging Mike Pence, who’s a QAnon guy,” Hogan said, “and he’s not going to be elected in my state.”

If Republican voters were to pick their 2024 Republican presidential nominee today, Hogan said it would likely be Trump. Hogan, though, argues politics can change dramatically in a year and he intends to be among a group of Republicans trying to figure out if there’s room for other candidates.

“I want to make sure we’re focused on solutions and looking toward the future rather than trying to just relitigate 2020 or looking backward,” Hogan said. “…I don’t think we ought to just be beholden to just one person at this point. There are plenty of great leaders in the Republican Party across America and I’d like to hear from all of them.”

On Thursday, Hogan met with a small group of Iowa law enforcement officials and Republican Congressman Randy Feenstra to discuss efforts to combat crime. As governor, Hogan has used state tax dollars to pay for more federal prosecutors who handle gun-related cases and he approved a 50 percent increase in state spending on local policing. Hogan calls it “re-funding” the police, as a counter to progressives’ calls for de-funding. Hogan said he didn’t like hearing some fellow Republicans call for “defunding” the FBI following the search at Trump’s Florida home.

“Most of our law enforcement officers at the federal level in the FBI are dedicated public servants who put the lives on the line to protect the rest of us,” Hogan said. “…We have probably more FBI agents living in Maryland than anywhere else and the vast majority of them deserve our respect and appreciation.”

Hogan said there are still a lot of questions that need to be answered to end speculation about the FBI’s actions, but Hogan credited the U.S. Attorney General for taking “a step in the right direction” by filing a motion to make public both the warrant and list of items removed from Trump’s Florida home.