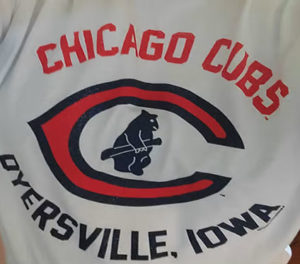 There was a lot to do in Dyersville last night as the Chicago Cubs and Cincinnati Reds met for the second-ever Major League Baseball game at the Field of Dreams site.

Fans who didn’t have tickets participated in the festivities taking place downtown. George Heeren grew up in the area, and drove up from Cedar Rapids just to take it all in. “Just to see what the Field of Dream has done to improve the life of people here in Dyersville — it’s just phenomenal,” he says. “The streets downtown are full. The stores are all open and there’s a lot going on. This is just a tremendous boost for Dubuque County. And I wanted to be a part of it.”

The festival also had vendors straight from Chicago selling all sorts of Cubs gear – including “Chicago Cubs – Dyersville, Iowa” t-shirts made exclusively for Thursday night’s game. “It’s amazing here just seeing all the fans from like all over the United States coming here and just for this one little game played in a cornfield you know like who would have thought,” another fan said.

Chicago native Jack Kacmar made the trip from Toledo, Ohio. He’s got season tickets for the Cubs and wasn’t about to miss this game. “Field of Dreams kind of holds a special place in my heart because my dad passed away a few years ago and like every time I watched the movie you know the playing catch for the last time and things like that,” he says. “So once I saw that we had an opportunity to come to this there’s no way I could pass it up. Like I know I’m gonna cry like a baby but I love it here.”

The Cubs beat the Reds in the game 4-2 as those who didn’t have a ticket watched at the festival in the Dyersville City Square last night. The Beyond the Game Festival wraps up today (Friday) with live music throughout the afternoon and evening.