You are here: Home / Sports / Iowa unranked to open the season 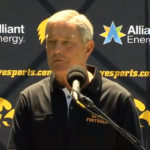 Iowa will enter the football season unranked. The Hawkeyes were not included in Monday’s Associated Press preseason poll, despite returning 16 starters from a team that finished 10-4 and won the Big Ten west division title. The Hawkeyes were also left out of the USA Today/Coaches preseason top 25.

“The bottom line is what is really important is where you are in January and that is still all that counts”, said Iowa coach Kirk Ferentz. “Those polls don’t starting getting it right until probably November or somewhere in there.”

Nine starters return for a defense that generated 31 turnovers last season. Junior linebacker Jestin Jacobs says the Hawkeyes are not following the polls.

“It is something we can’t control in the preseason and the only thing we can control is to go out beginning week one and perform each week. The rankings will take care of themselves.”

The Hawkeyes open at home on September third against South Dakota State.