You are here: Home / Sports / Iowa’s Jones adjusting to move to center 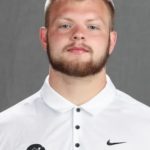 Iowa’s Logan Jones says it only took him a few days to make the decision to move to offense. The former Lewis Central standout began his Hawkeye career as a defensive lineman before being approached during winter conditioning about the opportunity to move to center to replace All American Tyler Linderbaum.

“Coach Ferentz talked to me about it and gave me as much time as I needed”, said Jones. “I kind of knew four or five days later that this was the move for me.”

Jones says one of the biggest adjustments has been making the blocking calls at the line of scrimmage and says he still learning as the new season approaches.

“There is so much stuff I don’t know”, added Jones. “You have got to be a sponge and you have to be able to soak in everything.”