You are here: Home / Agriculture / Rains may not be able to save crops in areas hit hardest by drought 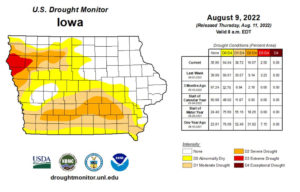 While parts of Iowa saw up to two inches of rain on Monday, it may be too little, too late for many of the crops that have been critically damaged by the long string of hot, dry days.

Meteorologist Dennis Todey, director of the U.S.D.A.’s Midwest Climate Hub in Ames, says there are big differences in corn crop conditions across the region, especially compared to areas in northwest Iowa that are in extreme drought. “We really have done the damage already and things are looking pretty bleak in some places,” Todey says. “We have some places that we could maybe still help limp through a little bit, but it’s interesting because, in contrast, you go up to northeast South Dakota or eastern Iowa, parts of Minnesota, conditions are pretty good.”

While any more rain that falls on Iowa this week may green up our lawns a bit, Todey says precipitation at this stage on the calendar will be of limited help to farmers. “There are still some chances for some rainfall, some hit-and-miss rainfalls, that could help some soybeans still, but we’re late enough now, the chances of being able to help much are not great,” Todey says. “Then the overall outlooks, they’re not terribly optimistic for great improvement.”

The latest map from the U.S. Drought Monitor shows moderate drought now stretches all the way from Iowa’s eastern border to the western border and that about 64 of the state’s 99 counties are in some form of drought.  “The other thing we’re concerned about now is starting to look towards fall soil moisture recharge,” Todey says. “We’re going to need some rainfalls in the fall to get some moisture back in the soils.”

The climate outlooks show above-normal temperatures and below-normal rain for most of the region through much of September.