You are here: Home / News / Large collection of Beatles memorabilia on display at Sioux City museum 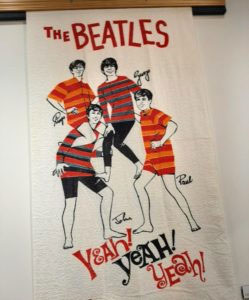 Beatles fans might want to consider a trip to Sioux City after a local fan donated her extensive collection of vintage items to the museum.

“Of course, a lot of it was aimed at kids in the 12 to 16 age group, which were their initial fan base. And so you have a lot of things like school supplies, notebooks, three-ring binders, things like that,” he says. “Address and assignment books also all kinds of clothing items, and just crazy things like there’s a box of hair pomade. Because of the shaggy hair at the time was considered quite a phenomenon.”

Anderson says the records provide an overview of how the Beatles evolved through the years from their beginnings in England. He says the collection includes 45s and LPs that show the Beatles’ musical history.

Anderson says the items in the collection are something any Beatles fan would want to have. “From what I can tell from the collector books and stuff — most of the important pieces she got ahold of at some point and this stuff is still you know very collectible to this day,” Anderson says. The exhibit of the items called “Meet the Beatles! A Fab Four Memorabilia Collection,” will be on display at the Sioux City Public Museum through November 27th.