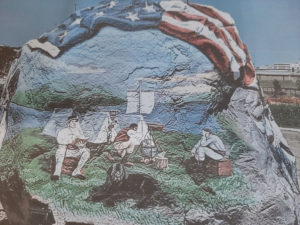 Floyd was the only member of the Lewis and Clark party to die during the exploration of the land acquired in the Louisiana Purchase. Dan Whitlock is a member of the Sergeant Floyd tri-state chapter, which recreates what was known as the Corp of Discovery Expedition.

“On the grass area there they’re going to pitch their tents and set up a campsite and it will be arranged as well as we can make it look similar to what the campsite might have looked like when the Corps was here. We try to make it as historically accurate as we can,” he says.

The encampment Saturday coincides with the actual date of Sergeant Floyd in August of 1804. Whitlock says a painted rock patterned after the freedom rocks in Iowa will be dedicated as part of this year’s event. “It’s technically not a freedom rock, because it’s a different depiction. We’re not depicting just the U-S military’s and honoring the soldiers that have been in conflict,” he says. “We’re showing images of different scenes of what took place on August 20 of 1804 when Floyd died was buried.”

Floyd was buried on a bluff overlooking the Missouri River where a monument to him now stands. Whitlock says the expedition rock is located further upriver. “After they were finished burying Floyd, they got in their boats, went upriver and camped overnight at Floyd River,” Whitlock says. “I think in my opinion — just based on what I’ve read — probably the planning for what to do next started there.”

The rock dedication is set for 10 a.m. Saturday. A reenactment of Floyd’s burial will be held Saturday at 6 p.m. at the Floyd Monument. The activities for the event are free on both Saturday and Sunday.