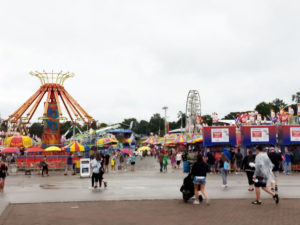 The Iowa State Fair wrapped up Sunday after an 11-day run topping the one-million mark again.

State Fair CEO Gary Slater says there were not many negatives. “The Fair is just tremendous this year — smooth running and whatnot, There’s a little devil in some of the details, but nothing that is any major thing,”  he says.

The last Friday of the Fair saw more than three inches of rain that fell in a short time — making for some wet fairgoers and some muddy areas.  But the rest of the days were nice — which wasn’t a given with triple-digit temperatures and heat indices heading up to the Fair start.

“A month ago, having 95-96 degree temperatures here, we just didn’t know what was going to happen,” Slater says. “But it did settle down after the first weekend, and we’ve had just tremendous weather there until that rain,” Slater says fair ticket sales are the top revenue source for the Iowa State Fair and he is pleased to see attendance top the one million mark (1,016,917) with Sunday’s numbers still to be finalized.

“Attendance means a lot to us, we try our very, very best to have something for everybody out here. And that does mean 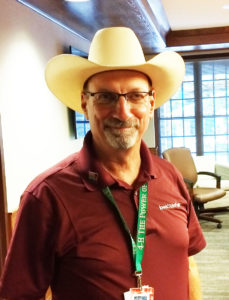 dollars in the bank and the more people you get out here then the concessionaires and all of the vendors selling all their wares in the building are all happy when we’ve got a good crowd,” Slater says.  Saturday saw 128,298 visitors — a record high for one-day attendance — with Sunday still to be tallied.

The total visitors could surpass last year’s  1,094,480 mark. Slater says the business side of the fair continues for several weeks. “It takes us a while just to pick everything up on the fairgrounds and put it back in the warehouse. Make sure you know if it’s still in good shape, or if it needs attention before next year and put those things in priority aisle or one that they’re good for next year’s aisle,” according to  Slater. “And then of course paying bills, gosh, we’ll pay bills through the middle of October here it seems like from the Fair.”

They will also work on the planning for next year’s State Fair. “We’ll work with 4-H and F-F-A on livestock show schedules this fall. Entertainment,  have offers in the works for next year’s grandstand show already,” he says. The 2023 Iowa State Fair will run from August 10th through the 20th.