You are here: Home / Sports / Downing takes over at center for Iowa State 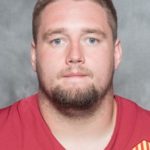 Trevor Downing is ready to become the leader of the offensive line at Iowa State. The All Big 12 standout at guard made the move to center when Colin Newell was injured leading up to a Cheez-It Bowl loss to Clemson and admits it was an adjustment making the calls along the line of scrimmage.

“That center is the quarterback of the offensive line in a sense as well as the tight ends”, said Downing. “There is that and then the closer you get to the ball the faster everything happens.”

Iowa State coach Matt Campbell calls Downing one of the best returning offensive linemen in the country and feels he will be a good fit at center because of his intelligence.

“The ability to move him into the center position because of some of those intellectual traits that he has is a big win for Iowa State football”, said Campbell. “It is certainly a great building block for our football team.”

The Cyclones open the season September third at home against Southeast Missouri.