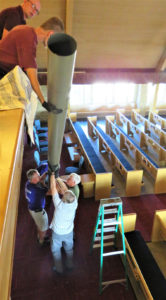 A Dubuque church is putting its renovated pipe organ back together this week in a project that the organizer says has also revitalized the congregation.

Merrill Crawford leads the effort to refurbish the organ that was built in the new Westminster Presbyterian Church back in September of 1964. “Every pipe organ has different landmarks along its long life where work needs to be done. And at just about 59 years now, ours typically, we discovered needed to have a lot of leather components redone. The leather was cracking and starting to leak air,” he explains.

The church started fundraising and hired the famous Dobson Pipe Organ Builders of Lake City, Iowa to oversee the renovation process. “We took all the pipes out into our grass courtyard and hand cleaned every one of them some two-thousand plus organ pipes. And then those components that needed further work were loaded in trailers,” he says. The parts needing work were sent to the Dobson shop and also to a subcontractor in Lansing, Michigan.

Volunteers got all of the cleaned organ pipes out of the church basement and began putting them back together with the refurbished pieces this week. Crawford says they will then have to wait one week before the final adjustments are made.
“The first day after Labor Day, two Dobson technicians will return to spend a strong week individually tuning, voicing, balancing every one of those organ pipes in its forever home,” Crawford says. 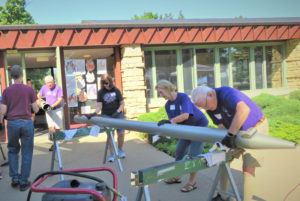 Crawford says the tearing down and rebuilding of the organ has included people of all ages from the congregation — and others who also wanted to help. “People from other churches, people who had heard about the project on Facebook and who just came up to check it out. It was a wonderful time,” according to Crawford. “We worked for several days dismantling the organ and every day we would have a lunch comprising are comprised of primarily food that people had cooked at home and brought in.”

Crawford says the church members came to realize this project brought them together with a common focus after kind of being away from each other during the pandemic. “Where we started out needing to renovate our pipe organ and thinking, that we should have a good time in the process. Now, we’re realizing that perhaps the greater gift is that we’re renovating the congregation, and just happened to have as a side effect, a renovated pipe organ that will continue to sing for many decades into the future,” Crawford says.

He says they are doing something unique for those who put in the time to help. “For every volunteer who came the kids, the seniors, and everyone who came and did hands-on work with this organ, whether it’s carrying something or cleaning a pipe, 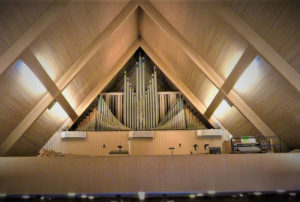 The organ before being taken apart for cleaning. (Merrill Crawford photo)

or whatever they did, we designated one particular large pipe as the volunteer pipe and have allowed every one of those volunteers to sign their name on the back of the pipe,” Crawford says. He says they’ll take digital photos of that for the church archives before the project ends and says those in the next generation can remember that they worked together to make it possible.

Crawford joined the church in the 1990s and is excited to hear the organ play after all the work. “I’ve never heard this pipe organ sound the way it no doubt sounded when it was brand new,” he says. Donations are still being accepted by the church for its $100,000 fundraising campaign to cover the costs of this organ renovation.