You are here: Home / News / Ernst, in speech at Reagan Presidential Library, outlines her vision for GOP 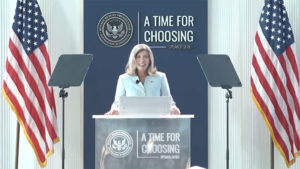 Iowa Senator Joni Ernst says the Republican Party must scale back a “bloated government” and recalibrate U.S. foreign policy, but she says the “most pressing” issue for the GOP is its stand against abortion.

“Restoring the value of life and the family,” Ernst said this evening. “Maybe more than ever in our nation’s history, we must stand up for the rule of law, but I would contend that it begins with defending and valuing human life.”

Ernst spoke tonight in California, invited by the Ronald Reagan Presidential Foundation to define “what it means to be a Republican” and what principles are paramount for the party in the future. Ernst credited Donald Trump for refocusing the party and, in particular, coming up with his “drain the swamp” mantra.

“For far too long in Republican politics, we failed to realize the strong undertones in our own electorate,” Ernst said. “…They truly believe that Washington has either left them behind or is out to get them.”

Ernst told the crowd “even the smallest change” in the federal bureaucracy is a challenge and she criticized the Democratic Party for establishing “new entitlement programs” and tax credits for electric vehicles.

“You may remember that Iowans elected me…with the commitment to ‘make Washington squeal,'” Ernst said, “but after eight years in Washington, I often feel that I am the only one squealing.”

Ernst urged Republicans to  push back on “academics and those in the political class” who she said are focusing on America’s “past sins.” As for the GOP’s approach to foreign policy, Ernst said “chaos reigns” in the world and the U.S. should pursue Reagan’s doctrine of peace through strength.

Ernst is among current and former Republican office holders who’ve been invited to speak at the Reagan Presidential Library, in the “Time for Choosing” series. Wyoming Congresswoman Liz Cheney delivered the keynote in July and  and Arizona Senator Doug Ducey is scheduled to be the speaker in September.