You are here: Home / Human Interest / Bats are starting to look for ways to get into homes 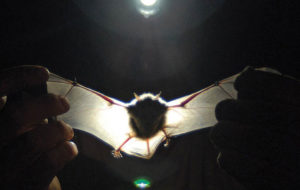 As fall approaches, there are already reports of people finding bats in their homes.

The Deputy Director of Siouxland Health, Tyler Brock, says bats can be scary to some and they also bring a worry about rabies.
“There is an occasional bat that does have rabies, but rabies is an illness it’s very serious — it’s rare to have in humans — but it is very serious. It’s usually fatal when a human being gets rabies if we don’t prevent that,” he says.

Brock says you won’t get rabies by just being in the same room as the bat. “You usually get it from the saliva of another animal. It usually happens through a bite, could happen through a scratch,” he says. ” just a bat flying past you is not an exposure. You’ve got to actually have a bite in most cases again and usually, the skin has to be broken in some way shape, or form for rabies to be passed.”

Brock says if you are bitten it is important to have the animal tested. “When we test bats and if they come to us alive we do have to euthanize them because the laboratory actually has to look at the brain material,” Brock says. “Not every bat that you find in your house is going to be tested — only bats where there’s a bite there’s a scratch.”

He says there is a series of vaccines, and it takes one or two days to get the test results. “You want to get treatment as soon as possible, and because the rabies testing of that animal doesn’t take that long. You almost always have time to wait for those test results so that we don’t have to do unnecessary shots on a negative animal,” Brock says.

Brock says if you think your pet has been exposed to rabies, you should take it to the vet for treatment.