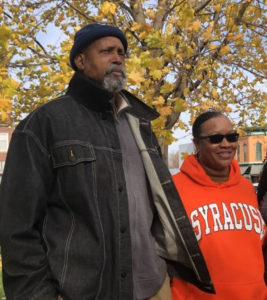 The last of the four people charged in connection with the murder of a Grinnell man two years ago was sentenced Monday.

Cody Johnson of Grinnell was sentenced to two years in prison after pleading guilty to accessory after the fact in the death of Michael Williams. Williams is black and all of those involved in the murder and the attempt to get rid of the body were white — but the leader of the Iowa-Nebraska NAACP says the killing wasn’t racially motivated.

Williams’ father James Byrd Williams says Johnson didn’t get enough jail time for what was done to his son. “He should get more time. He should at least get the same amount of time — seven to nine, even ten years — being involved with my son’s body because he touched that body. No matter how the state of Iowa said what it was, it was a lynching. And they don’t want that word stated in the State of Iowa,” Williams says.

Steven Vogel was sentenced to life in prison in 2021 for killing Michael Williams setting his body on fire. Cody Johnson was charged because Vogel brought him to the basement where he hid the body and Johnson tried to help Vogel move the body. Williams’ Aunt Paula Terrell says ever since the NAACP called the murder not “racially motivated,” there’s been a lack of attention on the case.
“If you hear on the news that a black man was murdered and set on fire and four white people were arrested and then the NAACP come up and say it wasn’t racial — it leads people to say maybe it wasn’t racial, maybe it was self-defense,” she says.

Julia Cox and Roy Garner pleaded guilty to charges in the case — including abusing Williams’ corpse and helping Vogel transport Williams’ body. Cox was sentenced to seven years in prison and Garner to nine.