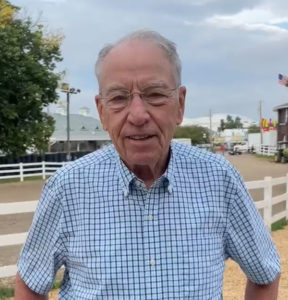 Senator Chuck Grassley is putting some caveats on the promise that a Republican majority in congress will be able to repeal the plan to hire 87,000 IRS agents.

Last weekend, Grassley said those IRS agents “probably” won’t be hired if Republicans hold a majority of seats in the U.S. Senate and House after this year’s election.  During a town hall forum in Bedford this week, Grassley said it would be a :long process: and Senate debate rules could prevent the G-O-P from taking action.

“When that bill would come to the senate, we’d have to have 60 votes to get it done,” Grassley said, “and there’d have to be some bipartisanship.”

If that 60 vote threshold is cleared and the bill passes, it would be up to President Biden to decide whether it becomes law. And it was the Biden Administration that proposed spending to modernize the IRS computer system and hire new agents to replace retiring staff over the next decade.

“If the president vetoed it, you know what the Constitution says. You’d have to have a two-thirds vote to override the veto,” Grassley told the crowd in Bedford.

That’s a rarity. Congress has voted to override just six presidential vetoes in the past 21 years. In 1996, Grassley was appointed as one of 17 members on the National Commission on Restructuring the IRS.

“We were hearing from the small business, the harassment that small business was getting from the IRS then and basically we made some changes,” Grassley told reporters after the forum in Bedford. “One of the things is, because of their activities in the ’90s, they got their budget cut by congress or they didn’t get big increases.”

Grassley helped write a 1998 law that reorganized divisions within the agency and limited some auditing techniques.

“We thought we had the IRS shut down,” Grassley said Sunday, “but not forever because you get these big government people coming to town and they want the government to take care of everything.”

Grassley was cheered by the crowd at Congresswoman Ashley Hinson’s fundraiser Sunday afternoon when he said a GOP congress probably would vote to repeal the IRS hiring plan.