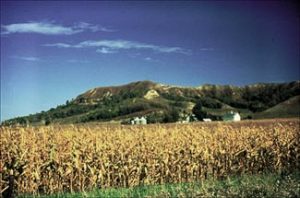 Before farmland covered nearly 90-percent of Iowa, the vast majority of the state was prairie. Only a small fraction of that natural habitat remains, making Iowa one of the most biologically altered states in the nation. Some Iowans are working to resurrect the state’s natural habitats and the wildlife that comes with it.

“We have made those strips of where plants and insects and a variety of animals can live, we’ve made them so narrow, and in some places, they’ve disappeared altogether,” Madigan says. “Those remnants to me are super important to preserve, they’re like a little lifeboat of what’s left.”

Only a tiny sliver of Iowa prairie land, around one-tenth of one-percent, remains untouched by agriculture and the development that surrounds it. Graham McGaffin, with the Iowa Nature Conservancy, points to the birds and the bison that populate the Loess Hills. McGaffin says it’s one of the state’s most biodiverse areas because it holds 75-percent of Iowa’s grassland prairies.

“You’ve got ornate box turtles that exist in the hills, plains pocket mouse, the Great Plains spink,” McGaffin says, “you’ve just got a ton of species and the hills are so unique.” Since 1963, the organization has been collaborating with landowners to bring back wildlife and he says they do so by connecting the fragmented natural spaces.

The lack of protected natural land isn’t sustainable for Iowa’s wildlife, according to biology professor David Hoferer  at Briar Cliff University in Sioux City. Hoferer says the destruction of the ecosystem is part of what has led to 47 animals and 64 plants being listed as endangered within the state.

“We’re at crisis point,” Hoferer says. “Either we do something this decade, or we’re gonna see massive, massive extinctions over the rest of the century.” Hoferer says it will take thousands of individual landowners stepping up to implement conservation practices to reverse the process. He says the state should focus on giving farmers incentives to reintroduce natural habitats on steep or flood-prone lands.

Farmer Lee Tesdell planted strips of prairie across his 76 acres in Story County a few years ago and now has patches of purple and yellow wild vegetation interwoven in his soybean fields. Tesdell says the biodiversity on his farm is blooming.

“I saw a coyote coming by and a raccoon came by and a skunk came by then the badger came out to check everything out,” Tesdell says, “so there’s a lot of critters down there.”