You are here: Home / News / New book chronicles history of ‘Look’ magazine from its creation in Iowa 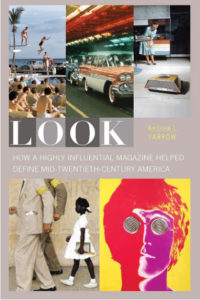 An influential magazine that was one of the widest-read publications in American history was founded in Iowa and it’s the subject of a new book by journalist and historian Andrew Yarrow.

Look magazine was launched in Des Moines in 1937 as an offshoot of the Des Moines Register and it quickly rose to national prominence. “There was a lot of great writing, there’s fabulous photography, and a great chronicle of mid-20th Century America, as well as very influential,” Yarrow says. “Lots of stories, powerful stories of civil rights, social movements of the ’60s, as well as fabulous celebrity photos and stories.”

Yarrow says Look was one of the greatest mass-circulation magazines ever to hit U.S. newsstands and it helped to create a national conversation around a common set of ideas and ideals. No media outlets today have the reach that Look did in its day, Yarrow says, and he calls it the type of media America needs — and that America has lost.

“It reached about 35-million people per issue, whereas today Fox News reaches about four-million, CNN, maybe two or three-million,” Yarrow says. “So there’s nothing that unites Americans, that kind of creates the stories that create our ‘water cooler conversations’ to bring Americans together.” Yarrow’s book is called, “Look: How a Highly Influential Magazine Helped Define Mid-Twentieth-Century America.”

The former New York Times reporter says Look was often confused with Life magazine, but he says it was actually much different and more radical for the era. Life, he says, typically turned to the East Coast establishment and Ivy League experts, while Look was anchored in the Midwest.

“Look liked to tell its stories, the stories of much more true, real people, real Americans,” Yarrow says. “So, it would tell stories of families, tell stories of young people, of old people, and in that sense was kind of a populist magazine and a magazine of the people and for the people.” Look’s final issue ran in October of 1971, a demise Yarrow says was largely due to the invention of color television.

“The great color ads that could only appear in big magazines like Look migrated to TV,” Yarrow says, “as well as general interest magazines lost audience and advertisers to special interest magazines, things like Sports Illustrated, Psychology Today, People, things are focused on particular topics.” Yarrow will be giving a lecture in Des Moines about Look on Wednesday (Sept 7) at 7 PM at the Hotel Fort Des Moines.