You are here: Home / News / Exhibit of masks from Blues legends opens in Sioux City 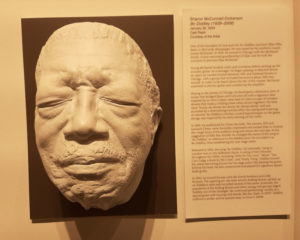 “This is one of the few exhibits whereas you really do encourage people to touch the exhibits. It’s life masks, it’s kind of different,” he says. “I would say most people probably haven’t experienced this. So it’s a good way to experience history at several levels. It’s the history of the blues coming out of the Mississippi Delta. You get a little lesson about slavery but also about the evolution of American music.”

He says the artist brings a special perspective as she is blind. “She actually I think has done over 60 Life masks blues legends so these are 15 on display here,” Hansen says. The traveling exhibit also includes 15 color photographs of performers by photographer Ken Murphy.

Hansen says it is a good compliment to the Beatles memorabilia exhibit also on display. “Arguably the blues evolved into rock and roll. But it’s kind of fun to have the blues here and then go into rock and roll where the Beatles some of their songs clearly they attributed to some blues beginnings,” Hansen says. “It’s just a fun exhibit. I think people will be surprised by it, and like I said, the biggest thing is that you’re actually encouraging people to touch a part of the exhibit. People aren’t used to that when they come into the museum.”

The Blues exhibit will run through October 16th.