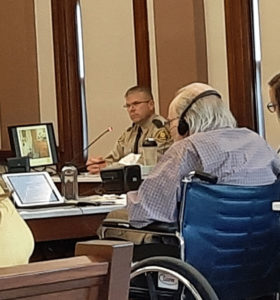 Testimony began today with the playing of a 911 call in the first-degree murder trial of a Merrill man accused of killing his son. The jury heard from the dispatcher — and heard two 911 calls made by Thomas Knapp’s wife Darlene on the day of the shooting.

In the first call, you hear the  911 dispatcher answer and Darlene Knapp says her husband is beating her son and has already beat her up. In the second call, Darleen Knapp says her 51-year-old son Kevin Juzek, is trying to defend himself against his father who has a shotgun.

The dispatcher is telling Darlene police are on the way. A shot is heard and Darlene tells the dispatcher to get an ambulance on the way as her husband has shot her son.  Here is the second call: Knapp 911 call

Plymouth County Deputy Rick Singer testified that they found Knapp walking with his hands in his coat and he had trouble understanding them. “Officers were giving him commands, you know, ‘show me your hands.’ He wasn’t taking his hands out of his pockets. They were getting him to come closer to where officers were. And he did continue to walk towards them and I’m not sure if that’s because he heard them or if he just was walking towards them,” Singer says. “Once he got close enough, he did take his hands out of his pockets. He had some medications in those pockets that he dropped to the ground and then he followed the commands of officers from there.”

Knapp is hard of hearing and during testimony sat in a wheelchair wearing a pair of headphones. The trial will resume Friday at the courthouse in Le Mars.