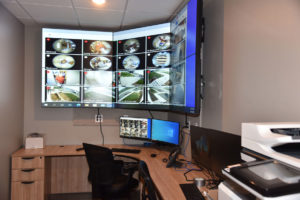 Center Coordinator Craig Matzke says it allows them to set up realistic crime scenes to help train students. He says the center can also be used to train professionals in the field as well. Matzke says once students collect evidence, they go through it and try to solve the crime that is staged at the center.

“It’s a new facility so that it gives them a blank slate to operate off of and train to the discipline, which they need the most training with,” he says. Matzke says they can create all kinds of scenarios in a controlled environment for students.
He says it’s better to train ahead of time rather than try to learn out on the streets at a potential crime scene and students learn the proper way of handling and collecting and documenting evidence and creating a chain of custody. They can go back and perform tests on the evidence within a certain scope of available equipment, and then learn how to best present that evidence for successful prosecution.

Matzke says the faculty all have been out in the field at one time. “All of our instructional staff have real world experience in law enforcement agencies. And in addition to that, we also have a great working relationship with area law enforcement agencies, EMS, and those other entities that we call upon to give us a guiding hand and setting up scenarios, giving us ideas on what we should focus on,” he says.

All that experience helps give the students a real test. “They can replicate those scenes and put them in the environment that they would actually be in. So it adds a real sense of realism,” Matzke says. Matzke says it’s another way to prepare the students to enter the real world of investigation and law enforcement.