You are here: Home / News / Drought continues to cause issues with Missouri River levels 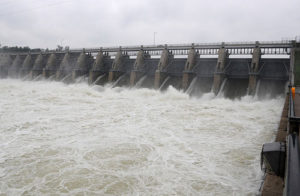 Prolonged drought across the region has pushed the U.S. Army Corps of Engineers to lower Missouri River levels from Nebraska City to Kansas City by a full foot.

The lower levels will affect boat traffic and could impact municipal water supplies and other utilities that rely on the river. Missouri River Basin Water Management Director John Remus  says conditions have been getting worse since the drought first began to emerge in July of 2020.

“In March, about 70% of the upper basin was experiencing some level of drought and about 20% of it was severe drought, very, very dry,” Remus says. “We have had some good rains throughout the year up there, but the conditions have improved, but not enough to really help the runoff.”

Remus says lower water levels will have an impact on navigation this fall. “Of course, that means more trips or more barges to get the same amount of product up and down the river,” Remus says. Navigation continues on the Missouri, though barges will have to lighten their loads to float on the river. The navigation season will end on November 28th, which is three days early.

Remus says even prolonged, heavy rains likely wouldn’t make up the difference in low soil moisture levels, as they’ve been so low for so long. “The wild card is really snowpack next year,” he says. “We had next-to-nothing for plains snowpack in 2022, and we had a below-average mountain snowpack. So unless we get better snowpack in the northern part of the basin, we’re probably going to be facing what we’ve seen this year again next year.”

Flows into the Missouri River have been reduced to cope with a much lower flood control pool in the six upstream reservoirs.

(Thanks to Alisa Nelson, Missourinet)