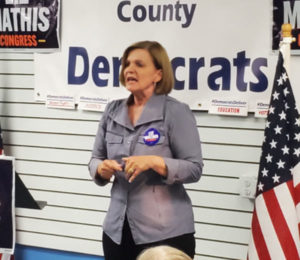 Democrat Liz Mathis of Hiawatha stopped in Mason City on Tuesday as part of her campaign for the Second District seat in the U.S. House. Redistricting that placed Cerro Gordo, Worth, Floyd, Mitchell and Butler into the Second District which also includes Cedar Falls, Waterloo and Cedar Rapids.

Mathis is currently a state senator and says she learned while knocking doors in Mason City people did not know who the candidates are in the new district. “They didn’t know. They thought they were still in the 4th District and that Randy Feenstra was going to be on the ballot. So, I think it’s going to be a lot of voter education, letting people know,” Mathis says. She says they’ve started television ads as a first step and are working to be sure people know who is running.

Mathis is running against incumbent Republican Ashley Hinson, from Marion who is currently representing Iowa’s First District. Mathis says there were several other issues that people discussed with her.  “I asked people what would motivate them to go to the polls, and most of the women said reproductive rights. Two others said mental health care and another one healthcare. Another one jobs, jobs and the economy.”

The Dow has been dropping since it was reported that inflation has sent consumer prices up eight-point-three percent compared to last year and up one-tenth of a percent from July. Mathis says despite Tuesday’s gloomy news, gas prices have started to come down and other products will soon follow. “The rest of the prices, we know we’re working hard on fixing the supply chain, and that’s only going to help products flow to us. The Federal Reserve is working on slowing the spending, so that will have an effect on inflation. We have to keep working on things out there on the horizon too on energy independence, and we have to keep working on hiring truck drivers to make sure they get the product to us, and that lowers the cost of the product.”