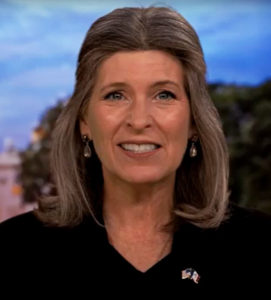 Iowa Senator Joni Ernst, a Republican from Red Oak, says the Ernst says the Inspector General has agreed to her request to audit the IRS and to ensure that the tax collectors themselves are paying the taxes they owe.

Ernst also says the Biden Administration needs to rethink its plans for adding thousands more IRS agents and clean up the current organization. “Hundreds of employees at the IRS itself may have willfully failed to pay their own tax bills, including tax collectors, and even a criminal investigator,” Ernst says.

Ernst says other IRS employees were flagged for not paying their tax bills in full or on time. “More than 300 of these were repeat offenders. Yet the tax collecting agency did little to discipline the tax evaders on its very own payroll. In fact, the IRS even rehired employees who had previously been fired or resigned because they had not paid their taxes,” she says. She says we don’t need more IRS auditors — we need a simplified tax code.

“Folks, we have a real problem that the IRS staff who enforce the tax law aren’t paying their own taxes and can’t even understand how to properly fill out their own tax forms,” Ernst says. She says the Biden Administration should make sure the current tax collectors have paid their own taxes before sending out more to “harass” innocent taxpayers.
“No one in Iowa that I talked to is begging for more IRS auditors — but I do hear about the urgent need for more teachers and childcare workers, police officers, restaurant workers, and more. Washington should allow job creators to keep more of their own earnings which can be put towards hiring more of the very essential workers we all rely upon,” according to Ernst.

Ernst says Biden says that no one making under 400-thousand a year will be audited — but the Congressional Budget Office has said that is not true.