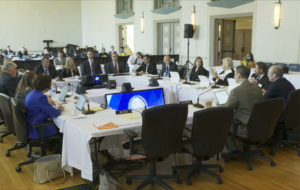 The Board of Regents Facilities Committee. (screenshot from meeting)

The Board of Regents Facilities Committee approved a proposal Wednesday to ask the state to chip in some money to repair buildings. Regent David Barker laid out the proposal that now goes to the full Board for a vote today.
“Thirty-million dollars per year to be matched at 50 percent by the universities — to address these building renewal needs,” Barker says.

He says they would also like the state to contribute another 30 million dollars to the tuition replacement appropriation they have traditionally paid to fund the existing debt service on building revenue bonds. Barker says the request is not unusual. “The Department of Administrative Services gets an annual appropriation or has certainly in past years for deferred maintenance type projects are building renewable projects, the Capitol complex, and other state-owned facilities,” he says.

University of Iowa vice president, Rod Lenhertz, says the campus has 262 buildings and the needs and uses are constantly changed. “Buildings that are built to last still have a scale of time of 20, 30,40 years where renewal for how we change the way we use those buildings, but also the systems within those buildings, the surfaces that protect those buildings from the elements have to be updated,” Lenertz says.

He says 200,000 square feet of antiquated obsolete buildings were removed from the main campus in the last three years and the plan in the next five years is to raze as much as 300,000 square feet of obsolete buildings. Lehnertz says even with those changes the University of Iowa’s deferred maintenance is $400,000s and ten buildings make up  53% of that number. “And they are the large ones and they are the old ones and they’re the ones that serve our students. Places like the union, our library, the pennant crest buildings, the Fieldhouse, and others,” Lehnertz says. “So believe me, when we come to the state and in asking for these dollars, they are importantly needed and that partnership will make a lasting difference for our campus.”

Iowa State University and the University of Northern Iowa administrators say they also have deferred maintenance, and all three schools say cuts in state funding for that maintenance in past years have allowed it to increase.