You are here: Home / News / Candidates for Iowa secretary of state spar over key issues 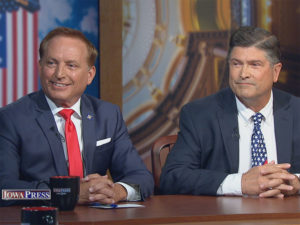 The two candidates running to be Iowa’s top election official for the next four years are quarreling over a variety of issues — including recent changes in absentee ballot rules and how to combat election misinformation.

Linn County Auditor Joel Miller, the Democratic candidate, says Republican incumbent Paul Pate should have pushed back on the legislature’s move to shorten the early voting period from 40 to 20 days.

“We need to make voting easier,” Miller says. “That was an attack on vote-by-mail and early voting.”

Pate, who is seeking a fourth term as Iowa Secretary of State, says Miller misrepresents the role.

“As secretary of state, you don’t get to wear a team jersey,” Pate says. “You’re the referee, so you follow the laws and the rules that you have on the books.”

“He was told it was not legal. He did it anyway and he was taken to court and the judge there said very clearly: ‘You broke the law,'” Pate says. “And he had to spend thousands and thousands of Linn County taxpayer dollars to now fix the problem that he knew going into shouldn’t have been done.”

Miller says new absentee ballot request form deadlines are creating headaches for voters, as more than 100 Linn County voters mailed their absentee ballots for the Primary this past June, but the ballots weren’t delivered by the new deadline.

“I’m administering the elections unlike Paul Pate who has never administered a local election…and so I see the impact of these laws,” Miller says. “How ’bout, when you’re bragging out 25% turnout, that means 75% of the voters did not vote?”

Miller and Pate made their comments during a joint appearance on “Iowa Press” which will air tonight at 7:30 on Iowa PBS.

During this morning’s taping, Miller accused Pate of failing to push back against people who dispute the results of the 2020 presidential election.

“All 99 counties are having to disavow them individually,” Miller said, “instead of the chief election administrator in the state disavowing these election deniers.”

Pate replied that he is speaking out on a regular basis.

“As recently as yesterday when my bipartisan working group of auditors put out a statement from me, taking to task these individuals who are putting out this misinformation,” Pate said.

Video of the program is already available online.