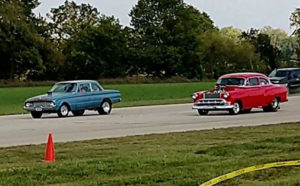 Heads Up Drag Racing photo of a past event.

Airports are usually noisy places because of all of those airplanes, but a variety of cars, trucks and other ground-based vehicles will be racing up and down the runway this weekend at the Atlantic Municipal Airport.

It’s hosting the Sixth Annual Heads-up Drag Race where organizer Jamie Joyce says they’ll be revving the engines of everything from street legal grocery-getters and hopped-up motorcycles, all the way to on-the-track-only professional dragsters.

“You might have two people that work at the same place and one guy says his Chevy truck’s better than his buddy’s Ford truck,” Joyce says, “and so this is a good opportunity for him to come hash it out and see who’s faster without getting a speeding ticket.”

In past years, racers and visitors have come from as far away as Texas, Oklahoma and all over the Midwest to take part in the event. “When this started out, it was going to be just a group of my friends and I were going to go out and do a little racing and maybe have our friends and family come watch and it escalated from there,” Joyce says. “We usually get between 160 and 190 drivers and about 1,500 to 1,800 spectators.”

The races will be held from 10 a.m. to 3 p.m. on Sunday. Admission is $5 while the entry fee for drivers is $20, with proceeds going to the Shriners Hospitals for Children.