On Saturday afternoon, gubernatorial candidate Deidre DeJear told the crowd at the Polk County Democrats Steak Fry that “freedom is on the ballot,” like freedom to access reproductive services and a quality public education.

“We’ve got a lot of fight ahead of us, but I know that we have what it takes to get it done,” DeJear said, “because we’ve done it before.” 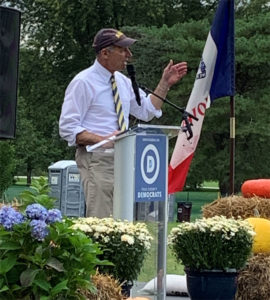 “We have a winning formula,” Franken said. “We may not have the money that Republicans have this time around, but we’ve got the candidates and we’ve got the energy to make this happen, folks.”

Republican candidates spoke to the Iowa Faith and Freedom Coalition Saturday night. It’s a key conduit to evangelical voters who play a big role in the GOP coalition. Senator Chuck Grassley was cheered for his role in blocking President Obama’s nominee for the U.S. Supreme Court and getting President Trump’s picks confirmed.

“Some of you prayed for the whole process to work…so I thank you for your prayers,” Grassley said.

Governor Kim Reynolds said it’s time for the evangelical movement to go beyond the generational victory of getting Roe v Wade overturned. 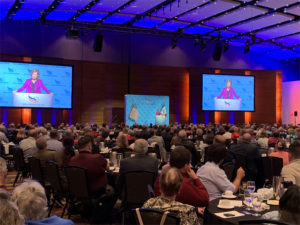 “Let’s get fired up about keeping America America and taking this country back,” Reynolds said. “…We’re going to do it.”

Election day is 51 days away.