You are here: Home / News / Fabric portion of UNI-Dome roof to be replaced 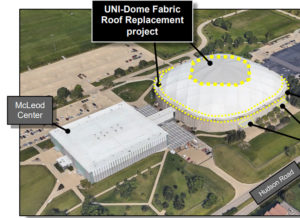 One of the key structures on the University of Northern Iowa campus in Cedar Falls is going to get an update to its roof. UNI vice president Michael Hager says the fabric portion of the UNI-Dome  roof is going to be replaced.

“In 1999, the entire roof was replaced, and about 75% of it is now a hardshell metal decking with a PVC. That is in the middle of a 30-year warranty, the warranty on that part of the roof extends until 2040. But 25% of the roof, that part at the very top there is fabric,” Hager says.

The UNI-dome was built in 1976 and the original roof was all fabric and held up by air. The building hosts the high school football playoffs, UNI football games, and many other events. Hager spoke to the Board of Regents during their meeting last week and says they are looking at two types of fabric that have the benefit of making things brighter inside.
“Putting a more transparent ring around it, which will let more natural light in more evenly across. And we won’t need to use the indoor lighting quite as much,” Hager says.

He says the new fabric will have a brown color when it is installed. “It will look a little bit like a toasted marshmallow once we do that. But it takes about six or eight weeks to bleach out and it will become white then, so back to the iconic color,” he says. This new product is projected to last 20 to 25 years.

“There’s some newer fabrics that have only been installed for about 12 or 13 years that they’re projecting longer. But there’s not an actual history on that. And so, and those are a lot pricier at this point. So we determined this was the best value for now,” Hager says.

He says the fabric does not require a lot of ongoing maintenance. “We just need to monitor if we have an unusual snow buildup that the weight is not an issue. But the modeling they’ve done is that they’ve taken 25 years’ worth of weather data, and superimpose that on the actual fabric and the roof structure to make sure that the wind loads and the snow loads and then together — which is where the catastrophes can happen wind and snow together — and this will hold up just fine for that,” he says.

The Board of Regents approved the $8 million budget for the replacement, which also includes some other related work on the building. Hager says the project will be paid for mostly with gift funds — but some university funds will also be included as well as athletic department funds.