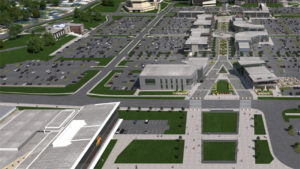 ISU’s rendering of the CYTown proposal.

Iowa State officials unveiled plans for a major development on the grounds of the Iowa State Center between Jack Trice Stadium and Hilton Coliseum. CYTown will include a hotel and convention center, a medical clinic as well as restaurant, retail and office space.

“We’re finding a way to repurpose that land in a way that provides new revenues and energize that space in a way that’ll allow us to reinvest in the Iowa State Center,” according to ISU athletic director Jamie Pollard. He says they will seek approval from the Board of Regents for phase one of the project in November.

The Iowa State Athletic Department took over the Iowa State Center three years ago. Pollard says in total it is about a 20-year project. “Overall, this project, we believe, when fully built out over the next 20 years will generate approximately $200 million of spendable revenue of which 75% of that will come from the rents that will generate off of repurposing that land,” he says.

Pollard says work will begin following approval by the Board of Regents. “The first phase is putting in all the infrastructure. So those lots to the basically the southern portion of the lots between Hilton and Jack Trice will all have to be dug up opened up,” he says. “All the utilities will have to be dropped in, and then those lots have to be all buttoned back up paved, ready to go. That process is about a two year process.”

The target for completion of the parking lot improvements and infrastructure is August 2025.