You are here: Home / Business / Manchester brewery hopes to expand with cans 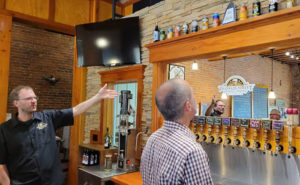 “We are in the process of launching a new Iowa branded program for Iowa made Iowa grown Iowa raised products and they’re a good example of where this is these are grant dollars that can help them go to the next level in their business,” Niag says. “So in this case, they’re going to be bringing in a canning line to help them again be able to distribute even further.”

Naig earlier this year awarded the brewery a $25,000 grant through the Choose Iowa program. Owner Kyle Sands says they’re excited about the new canning line.  “It’s going to be the first time that we’ve had a canning line here so we’re excited about that too so we can move some of our canning back in house here. We are canning today, we’re doing some contract brewing through the Back Pocket in Coralville, but we would definitely like to use that grant to put our own canning line in,” Sands says.

He says it would allow them to expand the sale of beers offered outside the brewery. “All of the stuff that we have on tap, and some custom one-off beers, so we can just kind of increase our cane volume for sure,” he says. Naig toured the facility last Thursday.

The Franklin Street Brewery got its start in Manchester nearly nine years ago – it’s the oldest building in Iowa that houses a brewery. Sands says while business is down compared to before the pandemic, it is starting to pick back up again. Along with the canning line, he says they’d love to put in an outdoor upstairs deck, but they’re holding off on that addition for now.