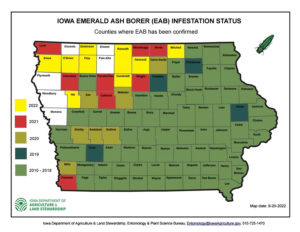 The emerald ash borer (EAB) has now been discovered in all but six of Iowa’s 99 counties.

The Iowa Department of Agriculture has confirmed that Mitchell County is the 93rd county with an EAB infestation. Larvae were collected near Spring Park in rural Osage and federal identification confirmed them as the invasive insect. It is the ninth confirmed infestation this year.

The only counties now without an EAB infestation are Plymouth, Woodbury, Monona, Osceola, Emmett, and Palo Alto counties in western and northwest Iowa.

The Ag Department says the invasive insect is a threat to native ash tree species — with the damage from the larva typically killing a tree within two to four years after infestation.