You are here: Home / News / You may need your air conditioner and furnace this week 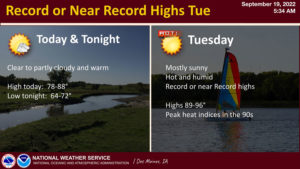 Record-breaking heat is possible in many Iowa cities today as forecasters say high temperatures may hit the mid-to-upper 90s on this next-to-last day of summer.

Meteorologist Jeff Zogg, at the National Weather Service, says it’ll be a steamy one. “We’re expecting some pretty hot and humid conditions, basically one day of it,” Zogg says, “ahead of a cold front that’s going to be coming through the area with high temperatures expected in the middle 90s with heat index values at least in the middle 90s as well.”

The first day of fall is Thursday and the arrival of cooler weather should be right on schedule. On Friday, some northern Iowa cities may not even see a high of 60. As for today’s heat, many Iowa communities could see high temps never before seen on this date.

“We could see record or at least near-record high temperatures, maybe some records in a few places, just depending on how high the temperatures get,” Zogg says. The forecast high for Des Moines calls for 96-degrees this afternoon, which would shatter the record of 92 that was set in 1931.