You are here: Home / Military / Fighter jet gets a lift to Sioux City for new paint job 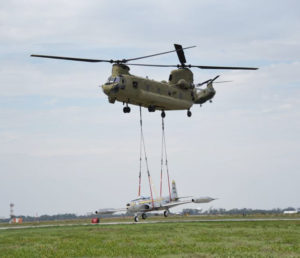 An historic F-80 fighter jet made a flight to Sioux City for repainting with an assist from a Davenport-based Iowa Army National Guard Chinook helicopter.

The 1950s era jet has been on display at Camp Dodge in Johnston and has the markings of the 174th Fighter Interceptor Squadron which was the predecessor to the 185th Air Refueling Wing in Sioux City. Flight engineer Staff Sergeant Jesse Ayala says carrying the jet in a sling under the helicopter to Sioux City allowed them to practice important aircraft recovery methods.

“Downed aircraft recovery is something very important not only in experience but in a timely manner as well and sot when it comes to the mission and it could save lives it could save equipment,” he says. He says the fighter jet hanging below the helicopter on a sling provided some challenges:

“The unique load essentially is we have to be creative and find a way to properly and safely secure the aircraft. And the aerodynamic aspect is basically how is it going to fly in the air and when it’s an aircraft with another aircraft, something that has tendencies to react to different wind and gusts. It can be something to really pay attention to so slowly but surely and just with experience is the best way to get around it,” he says.

The first generation F-80 fighter was assigned to the Iowa Air Guard after the 174th returned to Sioux City following their activation in 1951. The jet will be painted and then flown back to be put on display again at Camp Dodge.