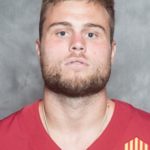 If recent history is any indication Saturday’s Big 12 opener between Iowa State and 17th ranked Baylor will be a nail biter. The teams have split their last six meetings and four of the games have been decided by three points or less.

ISU is 3-0 and the Cyclone defense faces it toughest challenge so far.

“They are going to force you to defend the entire football field”, said Iowa State coach Matt Campbell. “It really comes down to discipline, pre snap alignment and the ability to tackle in space.:

The Bears edged the Cyclones 31-29 last season in Waco after Iowa State misfired on a two point conversion attempt in the final minute.

“It is two good football teams”, said Cyclone quarterback Hunter Dekkers. “They are a good and well coached team and we are too. Just going into this game you know it is going to be a hard fought battle.”