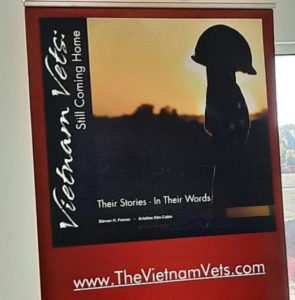 Books about Vietnam were the focus of an event Thursday at the Siouxland Freedom Park Interpretive Center.

A long-time Sioux City college professor turned over his extensive collection of books on Vietnam during the event. Ralph Swain’s collection includes more than 100 books. “I actually started accumulating the books just before I went to Vietnam because I wanted to learn about the place I was going to, especially since I’m half Asian, and I’m going to an Asian country on the pretext of engaging violently against other Asians that I encounter that are trying to get me,” he says.

Swain served in the Army in Vietnam and later taught at Briar Cliff and Western Iowa Tech In Sioux City. University of South Dakota professor emeritus Steve Feimer was also on hand. He wrote a book, profiling the stories of 31 Vietnam veterans.
“One story led to the other and I thought well I’m gonna do six guys and have it take me six months — but as you can see it took me nine years and we ended up with 31,” he says. “I just couldn’t say no, and every time I’d interview one vet they’d say you got to talk to this guy get this guy’s stories.”

You can find the book online at TheVietnamVets.com.