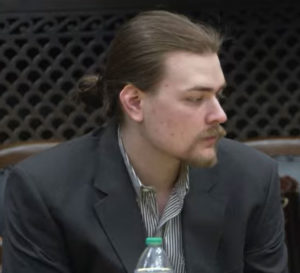 The first-degree murder trial of a Cedar Rapids man who is accused of killing his father, mother and sister in June of 2021 has wrapped up.

Alexander Jackson told police someone broke into their house and killed his family and shot him in the foot. KCRG TV streamed the closing arguments, as prosecutor Monica Slaughter told the jury Jackson was slow to give details as investigators questioned him.

“That vagueness those open holes that were left in his original story he was slowly able to fill with additional detail as those additional pieces of information helped him tell his story,” she says. But Slaughter says the details didn’t fit the evidence at the scene. She says Jackson claimed he was shot in the foot and then had to go to his bedroom to call 911.

But Slaughter says the evidence shows Jackson’s bloody footprints leaving the room. “They exit the room because that is the room where he shot himself. Not out in the downstairs living room where this supposedly struggle with this alleged intruder took place,” Slaughter says. “The splatter and the footprints prove to you ladies and gentlemen that the defendant was in his bedroom when he shot himself in the foot.”

Slaughter went over several other details found by investigators that she says don’t match the story Jackson told about the shooting.
“As you’re evaluating everything that you’ve seen over the last couple of weeks that has been presented in this case using your reasoning common sense — you’re going to find that the defendant story does not make sense,” Slaughter says.

Defense attorney Tyler Johnson in his closing arguments told the jury that the evidence against Jackson is all circumstantial.
“Even though the law makes no distinction — the evidence has to be so compelling as to remove all reasonable doubt,” he says. In other words, that there is no other possible interpretation of this evidence other than that the defendant is guilty.”

Johnson says some of the evidence that could have proved there was a killer in the house was overlooked. Johnson presented several family pictures and told the jury Jackson was happy with his family. “Why would Alexander Jackson kill his family it makes no sense this was a normal family this was a happy family,” Johnson asked.

He says there is not motive for Jackson wanting to kill his father Jan, mother Melisa and sister Sabrina. “When you try to make sense of the evidence in this case you also have to do that in the context of this family dynamic,” Johnson says. “Of why, why would Alex do this when he repeatedly told investigators that he loved his family that he wouldn’t do this.”

The case went to the jury just after noon today.