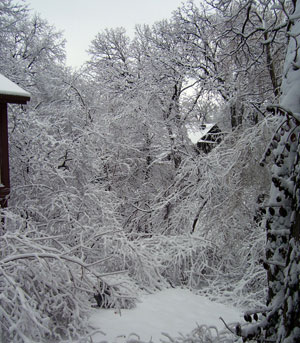 Governor Chet Culver says as of noon today, 130,000 homes and businesses in Iowa are still without power. "That number was as high as 265,000, so we are making progress," Culver says.

Five counties are of "particular concern" at this time, according to Culver — Black Hawk, Iowa, Marshall, Poweshiek, Iowa and Tama Counties. Civil Air Patrol planes are flying experts from Alliant Energy over parts of the state this afternoon to determine the extent of damage to electric transmission systems.

Lieutenant Governor Patty Judge says those flights will really help figure out what’s going on in remote rural areas.  "Many of these county roads have not yet been plowed, so the utilities…know they do not have power going to various homes, they really don’t have an idea of whether that’s just a snapped line or if it’s where the poles are down," Judge says. "This will really give them a chance to do a thorough assessment."

It may be a week before some Iowans in remote areas get power restored. Culver says that’s because crews will eventually have to go door-to-door to reconnect customers to the electric grid. "The ice was so severe and the weight of the sleet and the ice and the snow — collectively — did in certain parts of the state not only take down the power lines and the transmission lines, but literally ripped the wiring, if you will, from the homes," Culver says. [ Larger version of image above]

The governor has added the southeast Iowa counties of Lee and Van Buren to the list of counties covered by a disaster declaration. That means 60 of Iowa’s 99 counties — roughly the eastern two-thirds of the state — have been declared a disaster by the governor.

There are 47 shelters open today, and the lieutenant governor is urging Iowans who do not have electricity to take advantage of what’s available at those shelters.  "While the electricity is coming back on, and really faster than we thought it would a couple of days ago, we do have rural areas that will be out of power for another day, two, or three or maybe more," Judge says. "….I would urge people that are in rural areas to…think about going someplace warm."

Iowans are a "hearty lot" according to Judge, but people "need to be getting warm" and eat a hot meal. Governor Culver and top state emergency management officials held a news briefing over the noon-hour. "We feel good about having a handle on this very difficult situation," Culver told reporters.

Two deaths have been directly connected to the storm. Both were traffic fatalities in Tama County on Saturday. Culver says employees in the Departments of Elder Affairs and Human Services are calling the elderly, and in some cases going door-to-door. "We’re particularly concerned with our senior citizens that are still without power, so we’re going out there…trying to see if those seniors need help," Culver says.

Iowa National Guard Adjutant General Ron Dardis says over 200 Iowa National Guard troops have been mobilized during the storm, primarily to run electric generators. The generators helped pump water into water towers in rural communities and helped maintain sewage systems. The guard also has provided cots and blankets to many of the shelters.

Dardis and Governor Culver boarded a helicopter earlier this afternoon and flew to inspect storm damage in Marshalltown, Waterloo and Cedar Rapids. "I just want to ask all Iowans to continue to reach out and help friends and neighbors in need," Culver says. "They’ve done it already in the past 48 hours, but we’re going to need more of it."

Culver landed in Marshalltown shortly before two o’clock this afternoon. He’s due at the Black Hawk County Home in Waterloo just before four o’clock. Culver plans to visit the Alliant Energy "operations center" in Cedar Rapids at 6:30 this evening.