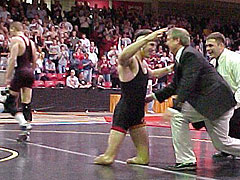 A national champion wrestler from Simpson College is urging Iowa legislators to pass a bill that would benefit Iowans who have to get an artificial limb because they are an amputee or were born without an arm or a leg. When Nick Ackerman was 18 months old, doctors amputated both legs below the knee to stop the spread of bacterial meningitis.

He’s now 27 years old, living in Davenport, working in the prosthetics industry, and lobbying for a bill that would bar insurance companies from limiting what they’ll pay for prosthetics. "You lose a leg — from diabetes, from something traumatic, you expect to have coverage for your prosthetic," Ackerman says.

Ackerman is running into the problem himself. "My personal insurance says I only have $5,000 worth of coverage per year," Ackerman says. Buying prosthetics for both legs, below the knee, is "way more expensive than that" according to Ackerman. Ackerman, who grew up in Colfax, Iowa, has gone through countless fittings. "To be accurate, I’d have to check my mom’s closet," Ackerman jokes. "…My first set of legs — at 18 months — have little Care Bear shoes and are about, you know, a foot tall from the top to the bottom. I’ve had probably a dozen different sets of legs, at least, growing up…As a kid growing up, as I grew, matured…my prosthetic had to be changed."

Ackerman worries about kids in his situation today who are covered by an insurance policy which either limits the amount of coverage per year, or imposes a lifetime cap on pay-outs for prosthetics. "If they would have imposed those caps when I was 18 months, would I have been able to be as active as I was growing up? Would I have been able to, you know, live a ‘normal life’ and have good prosthetics that kept up with my activity level?" Ackerman says. "…You’re limiting somebody’s lifestyle by limiting their prosthetic coverage."

Ackerman won the 2001 division three national wrestling championship in the 174 pound weight class. Ackerman now works for American Prosthetics in Davenport and he fits folks with artificial limbs. It’s the same company that made his legs for the past two decades. The bill Ackerman’s lobbying for passed the Iowa Senate, but has stalled in the House.