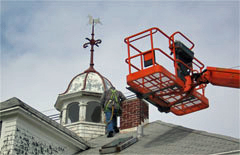 Pitts says the first phase was structural to allow them to have tours of the studio. He says the next phase covers the whole exterior of the studio, from the bricks to the wood to the windows. The studio was built by Wood in the upper floor of an 1890’s carriage house.

Pitts says Wood started working on the studio in 1924 and started working there in 1925. Pitt says the paint is peeling, and the windows have been painted over many times. Wood painted his most famous work “American Gothic” in the studio. Pitts says they’re trying to restore the exterior as close to its original appearance as they can, but he says they only have a few photos to go on. He says they’d love to find a new cache of photos of the studio from that era, but so far they only have a couple.

Pitts says the studio will stay open for tours throughout the renovation. Pitts says the work should be done by late August and possibly September if the weather doesn’t cooperate. He says things were already set back by bad weather earlier this year. Pitts says the renovation is expected to cost $400,000, and they’ve gotten an historic site preservation grant from the state and a private donation to cover the cost. Visitors can take a guided tour of the Grant Wood Studio Friday through Sunday between noon and four P.M.